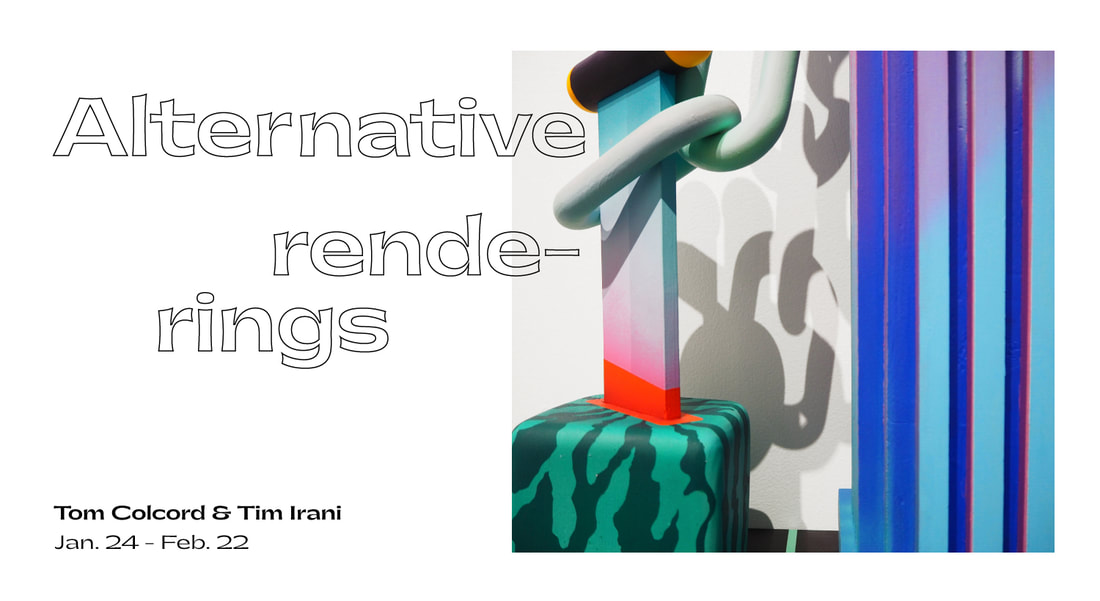 Glass Rice is proud to present, Alternative Renderings, a duo exhibition featuring new work by San Francisco based artists, Tom Colcord and Tim Irani. In their distinct styles, both artists draw inspiration from their surroundings, borrowing visual cues from their observations of nature, technology and memories, in an effort to redefine ideas of perception and existence.

In this show, Tom Colcord’s paintings explore the fluidity of perception in two styles unique to the artist’s practice; small scale pixelated scenes reminiscent of video games from the golden age of arcade games and larger dream-like painting collages of interiors and exteriors. The landscape collages are made up of flat or patterned shapes; printed rugs followed by sections of rich color, with spans of ornate foliage and other natural elements. In working in these two styles, he creates two versions of multi-dimensional spaces part of a continually changing psyche in an unconscious space. Colcord’s painstakingly rendered paintings remind his audience that perception, made up of our memories, ideas, and beliefs, morph over time until they become shadows of any original landscape we once held to be static. “My hope is that the viewer is reminded not about what they see, but become curious about what has been filtered away.”
​
Tim Irani’s series of work in this show is part of an ongoing exploration since childhood of two distinct worlds - nature and technology. As biointegration becomes more prevalent in our world, Irani addresses his fears and captivation with human-made automation by marrying the two worlds. By using imagery found in nature and technology, he paints them in stimulating colors as a form of documentation of the implications it has on ourselves and our planet. His sculptures similarly reflect this creative process of crafting digitally rendered scenes with analog methods by utilizing traditional wood carving and painting. With a humorous, yet dark tone, Irani constructs his paintings and sculptures so that bushes, flowers, birds and inanimate objects come together in a synthetic style. Irani’s work cultivates an environment where technology and the natural world coexist in careful balance, with objects communicating with each other in a unique and playful frequency.

In Alternative Renderings, both Colcord and Irani manifest newfangled landscapes and objects from fictionalized worlds that are simultaneously anomalous, yet also familiar, urging viewers to shift their focus away from the banalities of how society has taught us to see and absorb our world.